Ragnaros with the other Elemental Lords.

In the beginning, the world that would become known as Azeroth was ruled by the elementals. A nascent titan maturing within the world's core had consumed much of the fifth element, Spirit, and without this primordial force to create balance, the elements were thrown into chaos. The four Elemental Lords, who each ruled over innumerable lesser spirits, constantly clashed with one another on the surface of the primordial world. Ragnaros the Firelord employed brute force to destroy his enemies and longed for nothing more than to boil the seas and choke the skies with ember and ash, and wherever he went, volcanoes erupted, spewing forth rivers of fire. The other three Elemental Lords came to foster a deep hatred for the Firelord for his devastating and brazen assaults.[6]

When the entities known as the Old Gods arrived from the Great Dark and established their empire, the Elemental Lords saw the invaders as a threat to their dominion. For the first time in Azeroth's history, the native spirits of the world worked together against a common enemy. Ragnaros' fiery servants joined with Al'Akir the Windlord's tempests, creating blistering firestorms and cyclones of flame that reduced the Old Gods' citadels to ash. Eventually, however, the elementals of the world could not stand against the endless swarms of n'raqi and aqir, and were all enslaved.[6]

When the titan-forged arrived on Azeroth to battle the Black Empire, the Old Gods sent their enslaved Elemental Lord lieutenants to face them. Ragnaros battled for weeks against Tyr and Odyn, yet the keepers' metallic forms kept them safe from the Firelord's flames. Eventually the two keepers managed to push Ragnaros back into his volcanic lair in the east and defeated him. The Firelord and his minions were thereafter banished to a smoldering corner of the Elemental Plane known as the Firelands.[6]

It was then and there that the brothers turned on each other. For five millennia a battle was fought at the core of this world. It was during the Elemental Sundering that Ragnaros attacked Thunderaan, Prince of Air. Thunderaan was utterly defeated and the Firelord feasted upon his essence, but was unable to consume him entirely. Ragnaros divided what remained between his servants, Baron Geddon and Garr.[7]

In the center of a vast sky of fire in the Elemental Plane stands Sulfuron Keep, the home of Ragnaros. Until comparatively recently, he ruled his burning land with a molten iron fist. 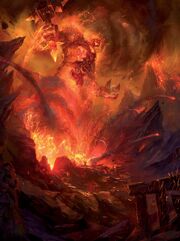 The summoning of Ragnaros.

Around three hundred years ago the ambitious and ruthless Dark Iron clan reinitiated the War of the Three Hammers against their dwarven brethren, the Bronzebeard clan and Wildhammer clan, still bitter over losing Ironforge. The Dark Irons launched a two-pronged assault: Sorcerer-Thane Thaurissan against Ironforge and his sorceress wife, Modgud, against the Wildhammers' capital city of Grim Batol, in order to prevent one clan from coming to the aid of the other.

Things did not go the way they hoped it would. Madoran Bronzebeard ultimately led his clan to a decisive victory over Thaurissan's army, who then fled to Thaurissan, the Dark Iron capital. The Bronzebeards pursued.

Modgud used her powers, eventually broke through Grim Batol's gates and laid siege to the fortress itself. The siege was broken and the Dark Irons routed when Thane Khardros Wildhammer waded through the battle and killed Modgud. Pursued by the Wildhammers, most of her forces also fled back to their city, only to meet Ironforge forces sent to help Grim Batol. Trapped between the two armies, Modgud's forces were annihilated.

The Wildhammer and Bronzebeard armies united to destroy the treacherous Dark Irons once and for all, and marched for Thaurissan. Thaurissan, seeking to summon a supernatural minion that would turn the tide of the war back to his favor, called upon the ancient powers sleeping beneath the world with seven of his most powerful Dark Iron allies. To Thaurissan's surprise, and ultimately his doom, the creature that emerged was more terrible than any nightmare he could have imagined.

Now, freed by Thaurissan's call, Ragnaros erupted into being once again. Ragnaros' apocalyptic rebirth into Azeroth shattered the Redridge Mountains and created a raging volcano at the center of the devastation. The volcano, known as Blackrock Mountain, was bordered by what is now known as the Searing Gorge, to the north, and the Burning Steppes, to the south. Though Thaurissan and the seven were killed by the forces he had unleashed, his surviving brethren were ultimately enslaved by Ragnaros and his elementals. Many Dark Iron dwarves remain within the lower areas of the mountain, especially Blackrock Depths, toiling away at the behest of Ragnaros and the Firelord's lieutenants. They worship Ragnaros.

Witnessing the horrific devastation and the fires spreading across the southern mountains, the Bronzebeards' King Madoran and Wildhammers' Thane Khardros halted their armies and hastily turned back towards their kingdoms, unwilling to face the awesome wrath of Ragnaros.

Now he lies at the bottom of that volcano on Azeroth, striving to find a way home, as well as to gather his strength once again so he can burn away Azeroth and take it for his own. Meanwhile, in Sulfuron Keep and elsewhere across the Firelands, his elemental princes battle constantly for dominance. He and his dwarven minions took control of the Blackrock mountain's volcanic depths and made war on the orcs in the Upper Blackrock Spire, which served as the seat of power for Nefarian the black dragon. Ragnaros has uncovered the secret to creating life from stone and plans to build an army of unstoppable golems to aid him in conquering the whole of Blackrock Mountain.

The adventurers of the Horde and Alliance entered Molten Core and defeated his army and the Firelord himself.

During the Midsummer Fire Festival, high level players can face the true threat facing the world. The Earthen Ring send adventurers across the globe on a quest to save the world from an Elemental War. The Twilight's Hammer plans to summon the Frost Lord into the world so that he may face Ragnaros bringing an elemental war to the world once again. Players are then sent to Slave Pens to face Ahune and defeat him before he may gain full strength and begin his attack on the Firelord.

After being defeated in Molten Core, Ragnaros was banished back to the Elemental Plane and resided in Sulfuron Keep, his seat of power within the Firelands. After the Cataclysm, he and his armies are launching a full scale assault on Mount Hyjal, attempting to burn the now-regrowing World Tree. He is allied with Deathwing, therefore ending his war against Nefarian's forces, and uniting them as a single army. In the ensuing conflict, many brave heroes gave their lives to protect Hyjal from destruction.Modèle:Fact By their noble sacrifices, the impossible was achieved: the Guardians of Hyjal led by Cenarius, Malfurion Stormrage and Hamuul Runetotem along with the adventurers of the Alliance and Horde pushed Ragnaros's minions and Ragnaros himself back into the Firelands.

Ragnaros in the Firelands.

At the Maelstrom, Thrall strains himself attempting to commune with the elements. Able to feel how broken the world is, and with the elements remaining silent for him, Thrall tells Aggra that he will have to work without limits to fulfill this task. As he ponders the meaning of this, his elemental calls are finally answered - by none other than Ragnaros the Firelord. Ragnaros gives Thrall a vision of the Firelands, ensuring him that its flames will engulf both the world tree and the world beyond it, showing Thrall's reinforced home of Orgrimmar washed over in a tide of fire as the final Hour of Twilight approaches. Stunned, Thrall falls to the ground, and the cackling Firelord dissipitates.

Now, the battle to protect Hyjal rages in Ragnaros's smoldering realm. As territory is gained and Azeroth's champions edge closer to the Firelands' inner sanctums, a monumental task lies ahead. Entrenched around Ragnaros's lair - Sulfuron Keep - are his most trusted guardians, including the turncoat Druids of the Flame and their mysterious leader. Yet Hyjal's defenders cannot afford to shy away from any of these dangers. Should Ragnaros prevail against the incursion and succeed in destroying Nordrassil, Azeroth will suffer a blow from which it might never recover.[9]

During the battle against Ragnaros in the normal dungeon he retreats at 10% health saying that his attackers have come too soon. However during the heroic fight when Ragnaros attempts to withdraw from the battle, he is interrupted by the arrival of Cenarius, Malfurion and Hamuul, who each channel a powerful spell that solidifies the lava surrounding the Firelord, binding him. With nowhere left to run Ragnaros bursts out of the lava and in a final battle with the adventurers, the fire lord is slain. Due to Ragnaros dying in his plane, the Firelands, he also suffers the same fate as Al'Akir, that being an eternal death. This makes him the second Elemental Lord to die.

After Ragnaros perished Cenarius states that the primal power Ragnaros represented can never be truly vanquished, and that another will take his power some day. Hearing this, Hamuul suggests that they maintain a constant vigil over the realm of fire.

Thrall stands over the great rift within the Maelstrom, channeling his energy into sealing it, when Aggra approaches.
Aggra: You've been at this for days, Go'el.
Thrall: The elements remain silent, Aggra. How can I help them if they won't speak to me?
Aggra: You must rest. Everyone has their limits.
Thrall: Look around you. This world is dying! I can't have limits.
Aggra: When will you see...that you cannot carry this burden alone?
Aggra turns and walks away. Thrall is seen shortly after seated on the rock, communing with the elements.
Thrall: Great spirits, please, speak to me! Show me what I must do.
The rift within the Maelstrom glows incredibly bright red, and a pillar of fire bursts from it. As Thrall stares in astonishment, Ragnaros rips through the rift!

Thrall's vision of the Firelord.

Ragnaros: YOU CALLED, LITTLE SHAMAN... AND THE FIRELORD HAS ANSWERED!
Ragnaros: YOU AND YOUR KIND THOUGHT THAT THE FIRES OF DOOM HAD BEEN QUENCHED...
Ragnaros raises Thrall into the air with a pillar of fire.
Ragnaros: BUT I WILL SHOW YOU THE TRUTH!
As Thrall hovers into the air, images of the Firelands flash through Thrall's mind. The images then change to a view of the forests of Mount Hyjal, surrounding the World Tree Nordrassil.
Ragnaros: THIS WORLD AND ALL THAT YOU HOLD DEAR EXIST ONLY TO BURN!
Suddenly, Nordrassil is set ablaze, and a great wave of fire envelops Mount Hyjal and beyond, heading for the city of Orgrimmar as Thrall watches from nearby.
Ragnaros: THE END COMES, SON OF DUROTAN...THE FINAL HOUR OF TWILIGHT.
The gates of Orgrimmar explode and crumble, as the wave of fire continues.
Ragnaros: AND THERE IS NOTHING YOU CAN DO TO STOP IT!
Ragnaros laughs maniacally as the fire wave approaches Thrall.
Thrall: NOOO!!!!!
Back in the Maelstrom, Thrall falls to his hands and knees, overcome by the vision.
Aggra: Go'el! I heard you call out...what's happened?
Thrall: Fire, Aggra...it's coming for us. Unstoppable, unending rage...
Aggra helps Thrall to his feet.
Aggra: Take heart, Go'el. The end is not upon us yet.
Thrall smiles and touches Aggra's cheek, then holds her to him.
Thrall: Whatever comes, I know we will face it...together. 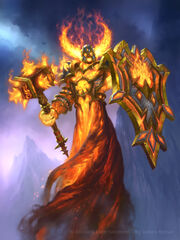 An alternate, non-canonical version of Ragnaros in Hearthstone: Heroes of Warcraft: Whispers of the Old Gods. 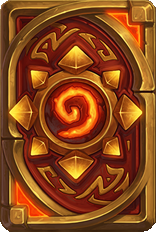 A card back themed after Ragnaros in Hearthstone: Heroes of Warcraft.